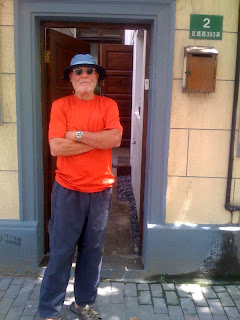 Ni hau from Shang HaiI knew it was going to be an interesting trip when we were told when we landed in Shanghai to remain seated until everyone’s temperature had been taken. Six health officials in full space gear then walked the aisles and shot an x-ray gun at each passenger’s head, forming a big red X. When it was determined no one was potentially carrying the swine flu virus we were welcomed to China.
What a place! The madness of Asia, but with every modern convenience imaginable. Unbelievable modern architectural monuments next to medieval hovels. The most modern public transport system in the world next to human pulled carts and bamboo scaffolding. Young, affluent people everywhere. Restaurants and nightclubs packed seven nights a week. Hot and humid yet surprisingly free of the noxious truck and diesel fumes so common in really big cities.
My favorite time of the day has been the early hours of the morning. I have been rising before 6:00 a.m. to walk through nearby parks. These meticulously maintained gardens are full of middle aged and older folks who greet the day with a variety of exercise regimens. A very calm scene. In one park near my son’s home people bring their caged birds to hang in trees and “socialize” with other birds. The result is a chirping symphony, much easier on the ears in the early morning that crowing roosters.
And then there’s the food. Like most major cities, Shanghai has become a foody Mecca, and hot restaurants and celebrity chefs are all the rage. Most of them concentrate on various Chinese regional cuisines, and the result is a huge selection of terrific food at long ago prices. A typical meal with beer and a quality restaurant usually costs less than $15 per person. 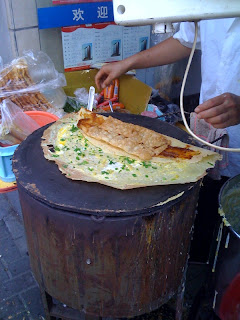 Just as exciting is the street food. All over town (20,000,000 is a town?) are tiny stalls selling a single dish. Two of my favorites thus far have been a suberb steam fried pork roll (I’ve been there three times in four days); and a fried crepe with egg, onion, cilantro, green onions, plum sauce and a thin and delicate pork rind – incredible.
A word on wine. There a many wine shops spread throughout the city, and wine is featured on virtually all menus. Unfortunaterly for us California wineries, it is clear the governments of Australia and the countries of the European Economic Union are subsidizing either the freight or the customs fees. Prices of those wines are little different from their prices in the U.S., while prices on our wines are about double what they are at home. There is some talk about changing the tax structure, which can only be good news, as this is a MAJOR MARKET. In the meantime, Tsingtao and Tiger beers are an adequate substitute. 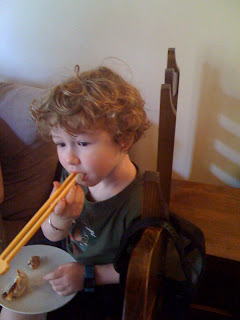 Tomorrow we are off to Yunnan Province, home of jungles, sacred peaks, fully half of China’s minorites – and more great food. My grandson Otto starts summer vacation; his dad Matt starts a sabbattical; and Anne, Lisa, Paul, Kathy and I start another adventure.
Will write again from Yunnan.
zai jian
Cheers!
Mike
Scroll to Top