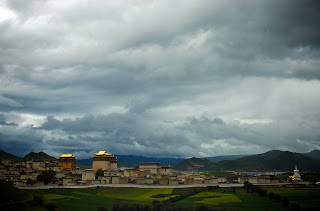 There is quite a contrast between the megalopolis of Shanghai and the southeastern province of Yunnan. From the Himalayan peaks down to the rainforest bordering Myannmar and Laos, Yunnan is the most diverse province in China, both geographically and ethnically.

The city of LiJiang is a UNESCO World Heritage site, and also a focus for the Nature Conservancy. At 7800 feet Lijiang is the home of the Naxi people, descendants of Tibetan traders who established a trading center of cobbled streets, intricate canals, and distinctive buildings. Government and world wide agencies have poured tons of money into this area and a major tourist industry has developed. The result is a very handsome old town built and rebuilt with quality materials. However, the economy is now firmly tourist centered, 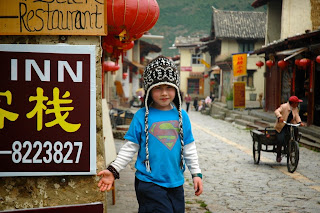 and the shops sell curios and the restaurants are set up to get diners in and out. There is also a two block area reserved for night clubs – a high volume mix of traditonal Chinese music with disco, techno, hip hop and other such trends of which I am blissfully unaware. It was not music to my ears. One of the major tourist attractions while we were there was our grandson Otto. Almost all the tourists were Chinese and a young blonde curly headed white boy was a curioisity indeed. He had his picture taken more often than many of the local attractions, and for the most part he put up with it quite well. 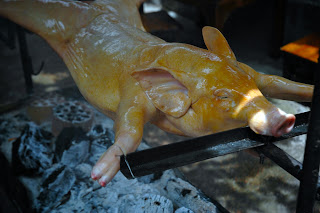 The food scene is interesting. Fresh produce and pork abounds, yet most restaurants offer only average fare. However, we did find superior food at the aptly named Chinese Restaurant. Here we had roasted pork right off the spit; kau yu (bar be que fish in sauce); and baba (wheat flatbread). We passed on the bee babies – roasted bee larvae.

It was in LiJiang that we tested some more Chinese wine. I had unpleasant memories of the two dominant players in the Chinese wine industry – Dynasty and Great Wall. Both, I believe, produce wine of great mediocrity. So when I saw saw Yunnan Red, a Cabernet blend, hopes rose. Sadly, my hopes were dashed, as the wine tasted very much like cherry cola – without the fizz. The search goes on. 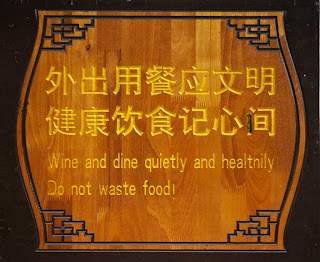 After 3 days we were off to Zhongdian – renamed Xannggelila (Shangri-la) by the Chinese government in 2002, undoubtedly to attract more tourists. The name Shangri-la is derived from the 1933 best selling novel by James Hilton, where airplane crash survivors found peace and harmony in a Himalayan valley. Many locations claimed they were the site upon which the book was based, but the government decreed Zhongdian was the place, so Shangri-la it is.

We hired a van to take us from LiJiang to Shamgri-la and en route we stopped at the jaw dropping Leaping Tiger Gorge; a gorge deeper than the Grand Canyon with truly terrifying rapids. We had the breathtaking experience of climbing down and up several thousand ricketty steps in the pouring rain with several thousand Chinese tourists. It got the heart pumping! 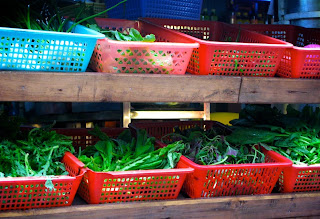 Afterward, we had a lesson in how local food should be utilized. We stopped at a no named vacant restaurant, where we were led to the kitchen where 8 or 9 baskets of produce sat. We pointed to some things we knew – zucchini, beans, tomatoes, chilies, eggplant- and then sat down to a cold beer. Minutes later an eight course feast appeared. Localvore eating at its best.

So here we are at a 10,500 feet valley with glimpses of 24,000 foot Himalayan peaks. It is cold enough to wear levis and a jacket, and the rooms have fireplaces. Most of the people here are Tibetan and the food and architecture reflect this. Prayer flags and yaks are everywhere. 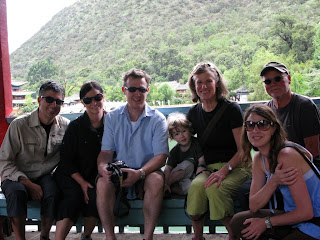 Dinner last night included braised yak in Tibetan sauce. The meat was terrific- lean and tender, with a wonderfully seasoned sauce. A tough and rather bland homemade bread added little.

Another outing today, with more local food. Tomorrow we put away our warm clothes and head for the heat – Hanoi and Vietnam. We will keep in touch.

For those interested in China today, check out Lost on the Planet China, by J. Maarten Troost. This Dutch born California resident gives an irreverant but often spot-on betrayal of travel in China today. Good read.