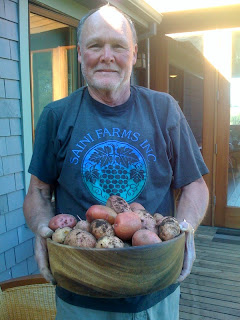 These mornings find me in long pants and sweatshirt. The fog lingers well into the day. Very definitely a cooler than average summer in our neck of the woods. Yet the harvesting continues. I’ve already picked and dried several hundred plum tomatoes, am fermenting several gallons of Asian pear cider vinegar, and have dug up most of the potatoes, shallots and onions. On my way to the winery yesterday I saw pickers harvesting Pinot Noir at a vineyard near Joe Swan over on Laguna Road. Many have commented this summer that there has been big fluctuations in temperature just miles apart. Weird.

This week was the last concert of the summer season, and Roy Rogers and the Delta Rhythm Kings played to a huge crowd. It’s always a bit sad when the concert series comes to an end; it’s a sign that another summer is about over.

That time is marching by was brought home in another way this morning. When we moved to Dry Creek Valley fifteen years ago, I would walk down the hill to get the morning paper and see a young neighbor girl waiting for the school bus. A couple of years later she was joined by her younger brother. She graduated, and I saw the boy grow up. This morning the bus didn’t stop. . . there was no one to pick up, as he too had graduated . . . . damn.

Last Friday evening we had a real treat. The Primiato Corpo Bandistico “Citta di Monte Unano” – a 50 piece Italian orchestra – played in The Plaza as part of a Sonoma-Italy cultural exchange program. We enjoyed the music of Puccini, Verdi, Rimski–Korsakov and others on a perfect evening. Sitting with friends sipping an assortment of Taft Street wines, it is hard to imagine a more idyllic scene.

I have just finished a fascinating book – Gang Leader for a Day, by Sudhir Ventkatesh. The book traces the experiences of a graduate student at the University of Chicago during the 1990’s. As a research project he decided to study the world of the Robert Taylor Homes, at that time perhaps the most notorious housing ghetto in the United States. He befriended a gang leader and soon became a frequent witness to the world of crack cocaine dealing, prostitution, drive by shootings, myriad form of hustling, and an odd but real sense of community. Another world for sure, but an intriguing read.

This weekend much of the Taft Street gang will venture out to the coast, where we will attend a winemaker dinner at Sea Ranch on Friday, August 28th. After wining and dining, we will spend the weekend kicking back – reading, walking the beach, and product testing.

Our Facebook account has 245 members as I write, and the numbers grow daily. It’s a real treat to see the rapid growth in the number of friends we have made. Our story seems to be an interesting one, so we will continue to tell it.

The next blog should include a harvest update. I went through my vineyard this week, culling uneven maturing bunches. I’ve got a number of vines infected with Pierce’s disease, but the healthy vines carry a heavy crop. Casual observation of neighboring vineyards indicate it could be a big year.